Historically, the Common was used for local people to graze their livestock. It was considerably larger before strips around the edge were enclosed for private use in the 18th and 19th centuries.

Although the boundaries of the Common have shrunk, the roads which now dissect it (Northwold Road, Rectory Road and Stoke Newington Common) have been in approximately the same location for at least 300 years, connecting Stamford Hill with Clapton and Shacklewell.

Hackney Brook used to run along what is now Northwold Road, turning south at the eastern tip of the Common to run down via Brooke Rd, to and across Mare Street. The brook was first canalised and then buried in the late 19th Century, to stop it being used as an open sewer.

The earliest housing around the Common was on the west side: Sanford Terrace is the only surviving stretch of the terraces, built in 1788–90, which graced the entire length until the 1970s.The remainder were demolished to make way for Smalley Road Estate. As late as 1868, the area to the north and south was still fields and market gardens, with three large houses.

Speculative development of terraced avenues commenced in the 1870s, first in the streets south of the Common, then to the north. 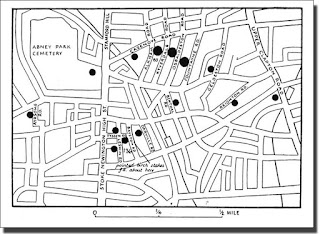 These building works revealed the area to be an important Paleolithic (Stone Age) site. Excavations found many flint tools dated to approximately 400,000 years ago. These are now held by the Museum of London. Roman remains have also been found nearby.

The Common became publicly-owned property in 1872, when the railway further split the largest piece of Common into two.

At that point the Common comprised 5.5 acres and the current paths and tree layout were established. In 1880, Gibson Gardens – an example of early, quality, tenement dwellings for working-class people – was built at the north-west corner of the Common. Gibson Gardens used to look over Raine’s Dairy to the Common; the latter is now the Peabody Trust’s development of Raine’s Court. Several early maps are available for viewing in Hackney Archives.